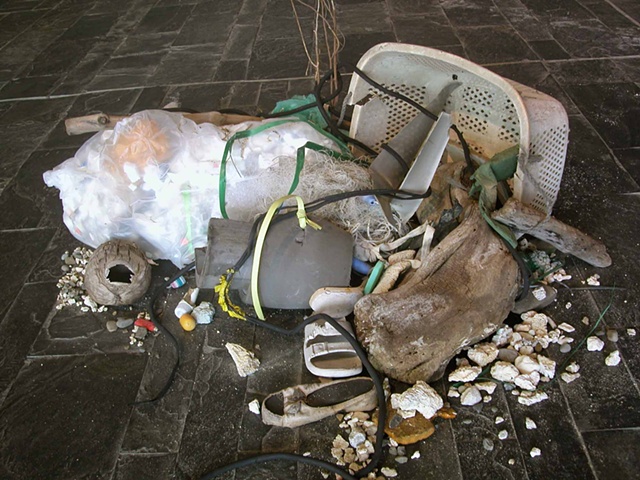 Resident in Taiwan National Museum of Marine Biology and Aquarium, Pingtung, Taiwan Around a month after the Typhoon Morakot, I traveled along the east coast of Taiwan and was astonished that the beaches were covered in beautiful driftwood brought by the storm. Some of the wood that found its way there came from places as distant as the Philippines. Walking along the beaches, however, I found that the beauty of the wood was compromised by litter and refuse. While many people searched for pieces of wood to make art or furniture, I couldn’t ignore the garbage. During my residency period in National Museum of Marine Biology and Aquarium, I collected the styrofoam from a cargo ship which was washed ashore on the coast in Hengchun. I collected discarded fishing nets, plastic bags, plastic bottles, flip-flops and other garbage from the coast in Kenting National Park as well. I used this garbage to make works that look like skeletons from sea life. They resemble works in a natural history museum, but are made of trash from human industrial production. The work presents the destruction of the ocean by humans, which is threatening marine biology. Many ocean creatures like sea birds, sea turtles and dolphin ate the drift garbage and died. I chose these three kinds of animal to represent the damage we do to natural. While industry helps residents make a living, I want to make people think about the repercussions of their lifestyle. The work pose a question to the viewer: How can we, as humans, be part of the environment without damaging it?