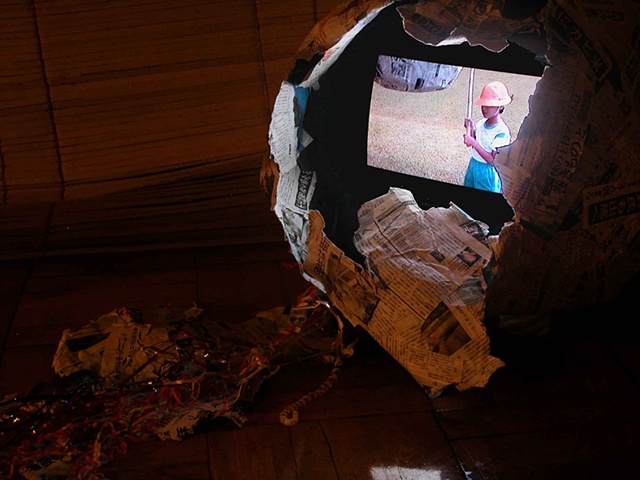 Residency Project in ARCUS, Japan The title of the show “Ho ga tei en” is original came from the English word which have the similar pronounce of “forgotten”. It makes an outline of the traditional garden in Japan. The installation presents a space of ACG (animation, comic, game), such as the sound from the children playing the game, the form of the nagashi somen and the absent figures of kimono. What kind of game is happening here?

To an outsider, it seems that some Japanese youth – and some adults – live in a paper-thin world. They base their identities on comic books, animation and game, often seeking escape from the real world to masquerade as the characters from the fictitious images that can be seen everywhere. Have they lost their way? Do the outlandishly dressed teens even know who lives inside their cosplay (short for “costume play”) outfits?

Being from Taiwan, trying to understand these illusory lives is confusing. I feel like I’m ambiguous, surrounded by the bizarreness of their behavior. Without a pre-defined role, where do I fit in? What seemed unusual to me before is not special here. I feel unknown. Surrounded by people who seem to have given up their identity, my identity also seems to have disappeared. I become empty, especially when I receive an alien registration certificate listing my nationality as “Chinese.” Having been born and raised in Taiwan, I’ve spent less than 10 days in China.

My installations are directly related to my feeling of isolation here. They are constructed from comic book pages, newspapers, and wrapping paper used in everyday Japanese life. The popular images contained in them are the camouflage with which young Japanese hide themselves, covering their personalities. About the kimono figure, I chose four types of comic books common in Japan: pornographic, sarcastic, martial arts, and what are called “beauty” comics. They present unreality. About the film, the shape of pinata is Daluma which was made by newspaper, and I invited the elementary school’s students to join this game. When the children hitting the ball, it seems they are fighting with our environment and the real life. Life is a kind of game; life is fighting with the reality all the time. What kind of result will it turn out? Will it be pure and colorful like the balloons and candies inside of the piñata showed in video?