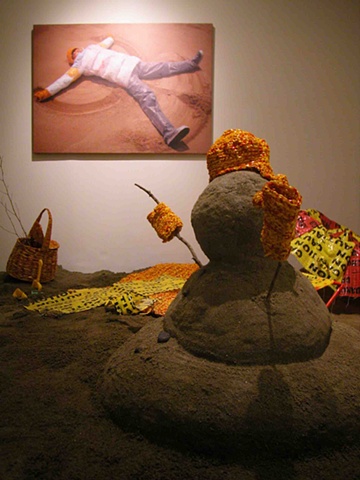 The concept of “Sand angel” is about the weird weather on our global world now. When people go travel to the country which is use to be snow all the time in the winter but actually not really happened. For example, I was expected to see the snow when I traveled to Vancouver in winter time this year, but the weather was too warm and only snowed on the top of the mountain there. Also the 2010 Vancouver Olympic organization was worried about not enough snow for there game, and they moved the snow from some other area on the top of the mountain to the game place. Therefore, I had an idea about insane weather. The image shows the weird situation about human behavior, which is a person wearing a snow coat that made by plastic sheeting filled with a lot of plastic bags, the gloves and hat are made by caution sheeting, and doing snow angel on the beach. It presents a highly absurd condition. Plastic bags are made to last, but most of them are only be used once. No mater if you reuse them as trash bags, they still end up in a landfill. If we keep cling obstinately to our course destroy our environment, we might stand on a land build by billion plastic bags instead of natural land one day.