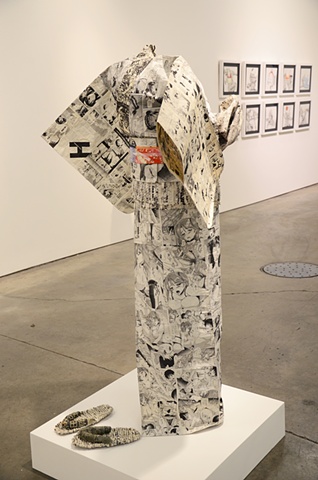 The work was made in Japan when I had a residency program in ARCUS. To an outsider, it seems that some Japanese youth – and some adults – live in a paper-thin world. They base their identities on comic books and animation, often seeking escape from the real world to masquerade as the characters from the fictitious images that can be seen everywhere. Have they lost their way? Do the outlandishly dressed teens even know who lives inside their cosplay (short for “costume play”) outfits?

Being from Taiwan, trying to understand these illusory lives is confusing. I feel like I’m surrounded by the bizarreness of their behavior. Without a pre-defined role, where do I fit in? I feel unknown and my identity also seems to have disappeared. I become empty, especially when I receive an alien registration certificate listing my nationality as “Chinese.” Having been born and raised in Taiwan, I’ve spent less than 10 days in China.

In “Knot Covering”, they are constructed from comic book pages, newspapers, and wrapping rope used in everyday Japanese life. I chose sarcastic comic books that describe our daily life by ironic and funny way; and political articles from newspapers. The works were made as the traditional Japanese costume kimono and the slippers, and they present an absent figure which directly related to my feeling of isolation.

The more humans surround and wrap themselves in the world of pop culture and the media, the more we objectify ourselves. Even in their traditional kimono, Japanese also objectify women. What’s left but the covering? I may be missing subtleties in the identities Japanese adopt, but to me the meaning of the individual underneath has disappeared. What is deemed culture has wiped out the value of just being a person.