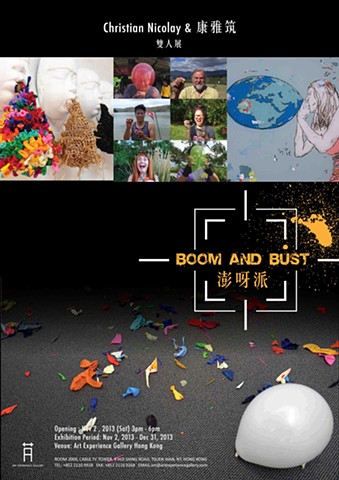 Boom and Bust
< previous next >

The main theme of “Boom and Bust” is set on the ups and downs of the global economic cycle and all the works in the exhibition are locked into such. People now live in a highly globalized era. The politics and economics of countries are inter-dependent. Financial crisis cannot be contained; rather, it will certainly spread around the world. “Boom and Bust” attempts to mirror the vulnerability in such economic entwinement and the balance between the recoil forces of economic “boom and bust”. The approach adopted is simple and humorous; yet, a serious topic is being discussed and queries are thrown out. In between absurdity and reality, we live in a world where the rational and irrational interact, fragile but unbreakable.