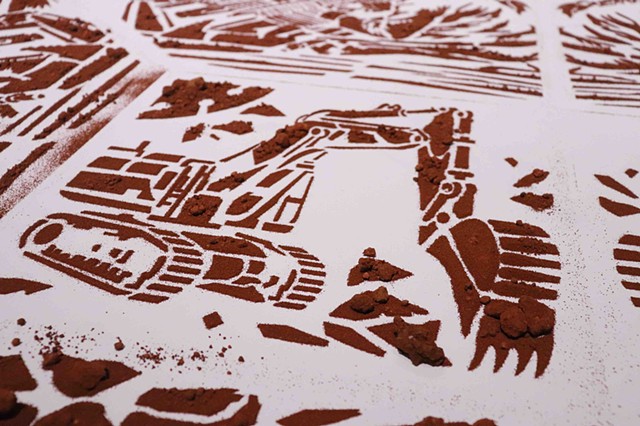 The concept of this installation originated in the Taitung city’s location which is surrounding by mountains and facing the sea, where you can see the first sun rises from the Pacific Ocean. It has stunning natural landscape, the traditional settlements of aboriginal cultures and the rich natural resources that have been attracting many land development company’s investments. Thus, the ongoing constructions process caused ecological concerns and controversy which indirectly destroy the beaches and marine environment. Dirt Carpet ＃9 laid out of dirt and crushed stones into repeating and symmetrical patterns with sun and rays of light in the center representing the warp yarns of the backstrap weaving loom. This type of loom is using two beams to hold the warp yarns that attached to a strap that passes across the weaver's back and is fixed at the waist part for weaving, and this weaving method is popular among many indigenous cultures in various countries. The rhythmical body movements of the weavers relates to the idea that the human body accumulates the power of the universe. Those patterns including daylilies, sugar apples, bonito fish, pottery spinning wheel and agricultural artifacts unearthed from the prehistoric ruins, in addition with the construction-related images. They transform the life experiences into texture images to respond to the relationship between people and environment, forms and life. Dirt Carpet installation generates an unpredictable external force as the time passes. The concept reflects to the cycle of the universe and the life responds to the action and intervention changed the patterns. Dirt Carpet ＃9 is interpreted a spinning thread connecting human and nature, urban development and the economic environment.