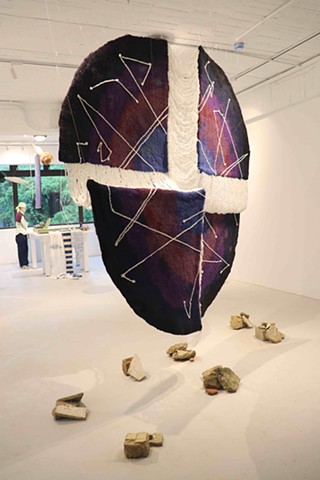 Homing as Star Trail
< previous next >

If one was to open the door to this chapter, each door, such as the metal gate to Home Village, the gate surrounded by the aerial roots of banyan trees, or the wooden door leading to the old military village, all become Doraemon’s Anywhere Door, decreasing passing time and shortening the distance of memories. It is as if compressing the scene through a long exposure images, capturing the changes, and re-presenting the ineffable process. “Homing” refers to hyphae forming into fungi networks and how they branch out before connecting. If they are unable to branch out, they will never be able to multiply and connect to form networks. Before connecting, hyphae must find other hyphae and attract one another; this phenomenon is called ”Homing.” Titled “Homing as Star Trail” this project is a way of recalling memories of military villages, refreshing similar memories of life through fiber and weave, which then connect into a way home. “Stars” have special meaning in the culture of military villages, and pentagrams appear in the onigawara (Note 1) of generals’ houses. If stars are symbols of home, then star trails are tracks captured by equipment during the earth’s rotation. In this project, the artist invited residents from different generations who either lived or are still living in or near Home Village and the Toad Mountain settlement to gather and reminisce about memories of home. The project is carried out through interviews, field research, and workshop, condensing time within the fibers and weaves, which further extend into explorations on topics such as life and culture, as well as the universe and nature, while responding to the concept of home as a value that signifies the gathering of forces and the rules of the cycle of life, reconnecting the residents that once lived in the same village.

Note 1: Onigawaras are decorated roof tiles used in the architecture of military village. The symbol in the middle is often family crests or trademarks, and on each side are patterns such as clouds that extend outward and downward, following the curve of the roof; the pattern has the purpose of warding off evil or bad luck.